Humanity is a metahuman concept.

Rolf Bossart: From a certain angle all your projects to date can be described as the elaboration and realization of a new realism. Can the point be determined where the old suddenly appears with the potential for transformation into something new?

Milo Rau: A few months before his death, I carried on a series of conversations with the philosopher and media theorist Friedrich Kittler, who was intensively involved, in his research into cultural technology, with various systems of writing from literature to computer programs. One of these conversations, about the power of images in the Romanian revolution, appeared in the volume Die letzten Tage der Ceausescus [The Last Days of the Ceausescus]. Kittler was no longer able to authorize another one, which concerned the relationship between the general and the particular according to Hegel. But why Hegel? Kittler’s most important books are aggressively undialectical; Kittler was the de-Hegelerizer of German philosophy. But as per the Marx quotation “all forms of state have democracy for their truth,” Kittler was in the habit of consulting the singer of the world mind now and then to verify his own philosophy of technology. Hegel’s definition of the particular as opposed to the general has consequences for a theory of realism: the particular—as formal logicians would come to believe a century after Hegel—isn’t contained within the general. The particular is the place in which the general is realized. And as a materialistically enlightened idealist you could even say that there’s no general beyond its realization. “But the interesting thing about Hegel’s definition,” Kittlers says at this point, “is the objective quality he attributes to the particular. Put differently, there is no absolute particular according to Hegel.” I saw only later, with a kind of shock, that this sentence, which hadn’t struck me at all during the conversation, represented a kind of dogma for my work: there is no absolute particular.

Rolf Bossart: What are your specific conclusions from this?

Milo Rau: This Hegelian insight, transported by Kittler, that there is no absolute particular, actually means that the whole ­theory of subjective narration, of subjective experience, from which performance proceeds has no real basis, because the solitary subjective doesn’t exist in this way. The ­human being is already subsumed or integrated into the collective. And that’s what counts. The moment he goes public or enters the stage, he no longer speaks for himself alone, even when he’s apparently only talking about himself. Of course there’s the subjective isolation of autism or solipsism, but these have no ­significance at all for the theatre.

Rolf Bossart: That’s probably the point where postmodernism was wrong, from today’s standpoint.

Milo Rau: Asserting the truth of the individual perspective, of the subjective state of mind, or celebrating the authentic naturally have their historical necessity as a reaction to the shock of the totalitarian collective in the twentieth century. Deconstruction is the balsam of the disappointed; concentration on detail is the hangover after the intoxication of the universal. Such phases are always recurring … and they last between fifty to a hundred years—someone should substantiate this historically. But thus they are inevitably overcome.

Rolf Bossart: The decisive moment at which postmodernism loses its attraction is probably always the one in which the subjects disengaged from their contexts no longer appear as liberated individuals, and suddenly only seem to be lonely, insignificant, and lacking in function, as nothing in what they do or say can be related any more to something general or to the general human condition. In your earlier essay “Als die Postmoderne tschüss sagte” [When Postmodernism Said So Long] you put it like this: “What only a moment ago was sweet with party and adventure all at once smelled sadly of long, lonely evenings in front of the video in some pothead academic dungeon. Audiences want to see people again. Or at least figures you could take seriously.”

Milo Rau: The critical sharpness of postmodernist skepticism, which says that the human being is naturally limited in his universalist-objective point of view because he is a body with particular aptitudes and characteristics, was blunted by Kant almost 250 years ago, in that he simply said that it was the human a priori. We are bodies. It makes no sense to debate this. There is always a material basis. You can neither meaningfully deny nor absolutize this, as primitive materialism does. In Kant’s concept of the transcendent subject—which appears as cognitive and has access to superindividual concepts—the problem of materialism and skepticism was simultaneously overcome.

Rolf Bossart: The accusation always leveled at this Kantian subject was that it could flee beyond real conflicts into the refuge of inviolable truth. That it simply made itself free of contradiction by leaping into transcendence.

Milo Rau: Although it’s clear that Kant had to be overcome by Hegel, and Hegel in turn by Marx, you have to keep in mind exactly what it was that Kant’s transcendental subject countered, namely the puritanical materialism of Diderot and the stylized skepticism of Voltaire, that is everything that we generally call the Enlightenment. But in fact for Kant the entire Enlightenment was a post-Baroque, a kind of postmodernism, a struggle with the scares and errors of the great globalization shock of the late Middle Ages, those terrible genocides and religious world wars that began with the discovery of America and were to continue until the American War of Independence and the birth of the nation as a new religious principle in the late eighteenth century. And then—pow!—along comes Kant, that Badiou of the eighteenth century, who conceives the metaphysical mathematically, overcomes empiricism and dualism, and restores the subject to inherent being. For with Kant—and this is the revolutionary thing—the subject is no longer a critical concept. No, it obtains access to metacritique, that is to those concepts that really give shape to reality, in its s­­ubjectivity: from the awareness of space up to truth, to justice, to God, and thus to humanity. It’s clear that Kantian universalism and thus its subject philosophy are theoretical limiting concepts, and in this are completely ahistorical (as Feuerbach famously observed). But I personally think that concepts such as law (or the antagonistic, the political, or even the beautiful) can’t be understood without these Kantian components, without the messianic element of a quasi divine act of subjectivization in which the individual emerges from his historical conditionality and exemplarily creates justice, truth, beauty from his simplest quality—that of being human. But the decisive point here, and I insist on it repeatedly, is that the transcendentality of the subject is a concept, not a given; it has to be artificially produced and only exists in the cartographic space of a mental or agonal game. Because it’s a theoretical limiting concept (and not an empirical determinant), the subjective can only be realized within a theoretical framework according to the rules of the game (which always need reinvention). And that’s the whole truth about what we call acting, and the reason why the postmodern concept of authenticity or the self-congruent expert (Voltaire’s or Rousseau’s naive heroes, who turn up again in Camus’s stranger and today’s non-professional actors) remain artistically unsatisfactory and are completely lacking in my work. Realism is unthinkable without transcendence; humanity—so as not to be cynical humanism—is a metahuman concept. And while Kant simply and coolly establishes this mathematically, Hegel makes something heroic and delightful out of it, with the reality of an objective mind and the connection to genius.

Rolf Bossart: What does this ­Hegelian ingredient mean?

Milo Rau: It’s interesting that after postmodernism premodern things that seemed to have been overcome by the previous modernism are now returning and reconnecting with hypermodernism. Like Hegel, for example, whose concept of the heroic goes back to the premodern, ancient understanding of the character or figure in tragedy.

Rolf Bossart: Postmodern ­concepts are critically and skeptically concerned with the unfulfilled promise of modernism to overcome what is old. But at the same time they reject actualization, transformation, or reuse, which are essential to any modernization, and give rise themselves to a backlog of innovation, which ironically can be broken through by a new modernism.

Milo Rau: We should basically install a new system program for the present time. If you think about it historically, it’s clear that Kant and the Romantics who came after him couldn’t simply have scuttled past if the whole deconstruction of the Enlightenment hadn’t previously happened. The same ideas, voiced in a pre-postmodern way, for example, can be pure retro-kitsch or the new that the old from which it derives once was. Only when deconstruction has reached its end can we say okay, that was all right and proper, but nonetheless! And the time for this nonetheless, for this straight talking ­beyond all epistemological reservations, is now.

We should basically install a new system program for the present time. If you think about it historically, it’s clear that Kant and the Romantics who came after him couldn’t simply have scuttled past if the whole deconstruction of the Enlightenment hadn’t previously happened. The same ideas, voiced in a pre-postmodern way, for example, can be pure retro-kitsch or the new that the old from which it derives once was. Only when deconstruction has reached its end can we say okay, that was all right and proper, but nonetheless! And the time for this nonetheless, for this straight talking ­beyond all epistemological reservations, is now.

studied theology and history in Fribourg, Berlin, and Lucerne, taking a PhD in The Theological Readability of Literature. Studies in a suppressed Hermaneutics. He is a lecturer in religious studies and psychology, and publishes in various journals. 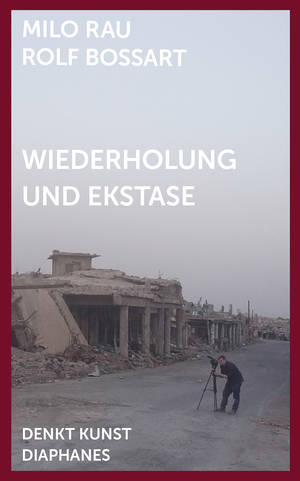 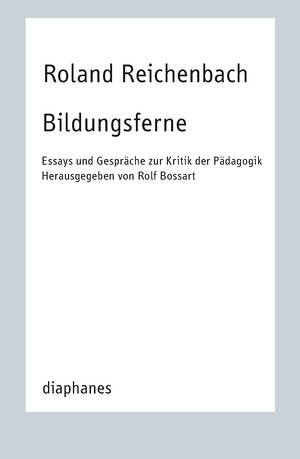 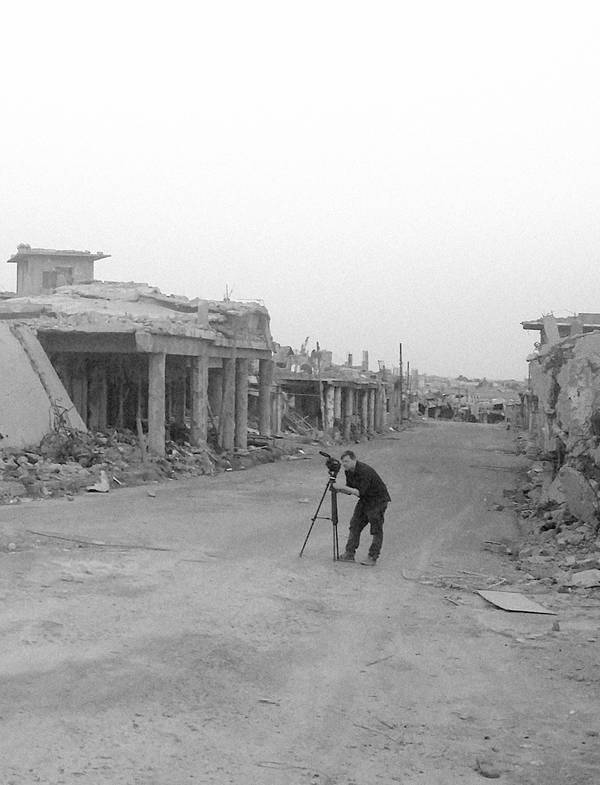 studied in Paris, Berlin, and Zurich with Pierre Bourdieu, Tzevetan Todorov, and others. Since 2002 he has published over 50 plays, films, books, and actions. He was honored this year with the Saarbrücken Lectureship in Drama and the 3sat Prize. From the 2018/19 season he will take on the directorship of the NTGent.