The last philosopher. The zen-queen.

– In what way are you a communist – since we need to define this: someone who is convinced that a totally different form of organization of communal life would be good for the human race, –

– Isn’t that equally true of monarchists and leaders of sects?

– but the people should behave differently, right?

– They should be totally different.

– Are you not simply a misanthropist?

– No, because there are people that I like, very much even. And I understand all the less why most people feel compelled to be so nasty.

– Most people don’t seem to be quite as bothered by this as you are.

– Oh really? In my perception, most people are pretty bothered by anything that is different than themselves. That is why we need rules that define how to behave toward people we can’t stand.

– You have just been suffering in a train compartment with two young grandmothers that got talking to each other while you were trying to work. “Work“ with you means writing megalomaniac texts about the world order, for an imaginary public. You are only taken seriously by other self-important idiots hoping for reciprocal attention.

– The beautiful, friend, is it not objective? Volker Braun? Love? And I don’t know of any cases where crocheting and diplomatic small-talk about babies has changed the world.

– It is doing so as we speak, in its way – certainly no less than being very alone and writing essays.

– Actually, the world order has never been properly overhauled, ever. All attempts petered out.

– You want to force a rationality and beauty on the world that she does not deserve, that has little to do with her.

– That’s silly, because you don’t even have a hint of power to do so. And it is not on point, you have no majority.

– That is the way that all those idiots think that are continually watching each other being idiotic and thinking, what terrible, obscene, ugly manners! But instead of complaining or striking or criticizing, they adapt, and the next day you see them behaving the same way.

– I thought the parole Widerstand gives you dry heaves?

– Yes, but that is just historical. You can’t just translate the French Résistence into German. I associate it with declaratory ersatz politics. People lying to themselves about the ineffectiveness of their lack of action.

– That says more about where you grew up.

– On the content level, it’s basic. It just isn’t enough. But I guess if you have no talent for activism, it is the thing to turn to. Better resistance than nothing. It is a recommendation suitable for all and everyone, not only the brave. That is a good thing, in my book. Don’t ask people to do things they can’t ever be good at.

– What about mobilisation? Guerilla warfare?

– That would be a start.

– You are always thinking, how could things be totally different? But that isn’t politics, that is longing, Romanticism, moi-c’est-un-autre. You are always discontented, just because you were born as a woman. You must learn to deal with frustration, accept things you can’t change. Otherwise you create that typical permanent temporary atmo that you hate so much about yourself.

– And if I accept these things, then I’m reconvalescent, as a ­happy female and proponent of social market economy, or what?

– A proponent of what is the case.

– That would be the model of a universal opportunist that you are suggesting to me, eh?

– The last philosopher. The zen-queen.

– And until then you propose to live in discontent, yes?

– Why do you think I am splitting this up and writing a dialoge between you and me?

– I must be revolutionary and zen-queen at the same time. One needs such calm as a field marshall. Deep in your soul you don’t really care, you only love the night, the fight, the blood of the skies, the battle.

– You will never be field marshall. Not a spark of strategy in you. You are a boar. A heavy charger. That attacks cement walls, ­almost on purpose, fearing a path might get it somewhere where it isn’t better, after all.

– I don’t think it is such a problem that I am a misanthropist. I want a system where I don’t have to pretend to like people in order to be okay to them. Just like in that compartment. I was suffering, but I was also listening. I heard how they are, how they live. If the world were different, and they had less fluff and more real stuff to talk about, there would have been no cause to leave the room. By the way, in the real conversation, I could think of nothing I might have shared with the two. But it was good that I was forced to share a compartment with them. I would never have chosen to.

– Because you feel your writer’s life to be artificial and suspended from the rest of the world. This is also your own fault, being so caught up in such ununderstandable ways, talking so funny always, with your ambition in all the wrong places.

– Because they would never understand what moves me. Worse, they would understand distorted versions of it. Not that I couldn’t explain, but they wouldn’t understand my differentiation and why I can’t just be normal with this. Why I hate some things so much, and love others so much, while they knit with their opinions and practice tolerance and self-constraint with apparent ease. If they do mark the corners of the room with their opinions, they do it in a calm and gentle way that turns me, by contrast, into a rowdy.

– And why must you really always be so unpleasant? You are the worst chauvinist of them all, with ever changing content. Almost pathological, as if your identity were in disgust.

– I percieve the raw situation, that the second young grandmother came in and immediately started babbling, un-called-for assessment of my hair ...

– That was a kind of aggression, you’re right. She was also being awful to her husband because of their tandem bike holiday. But later during the conversation you heard how she lets her flowers grow and her grandchildren get dirty...

– There she was obviously making her home sound normal, while it is probably as obsessively messy as the way she ate her home-made pizza for hours on end and made such a fuss about everything.

– Well, you learned something about her mind, right? That made you start thinking about respecting other human beings, right? Why she is exemplary. Everyone should talk that much, if you want to be familiar with all sorts of people.

– Can we agree that there is a difference between a good system and good behaviour? I am communist as a system theorist

– In the way we all are system theorists. Good behaviour is necessary in any system. A matter of perpetual discussion. Can you call me a liberal communist?

– Aren’t there any other words you could use that are less ­poisoned by historical meaning? 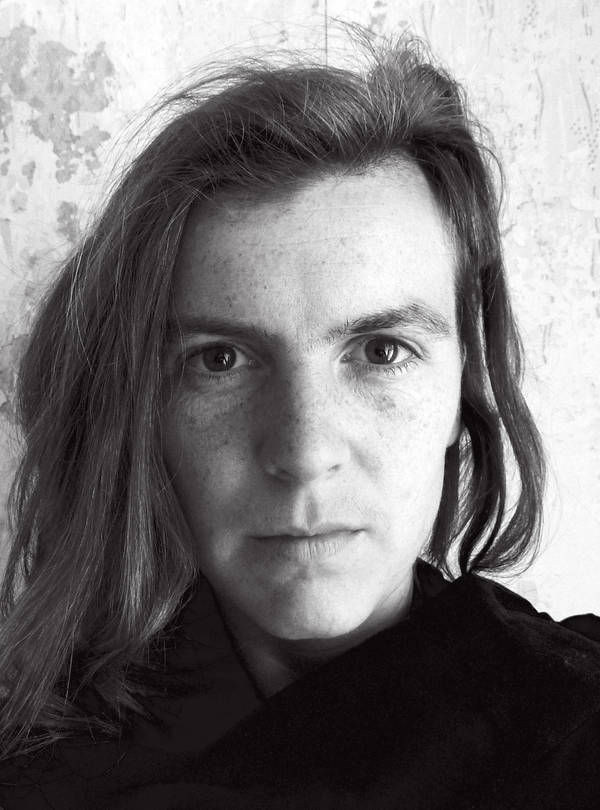 was born 1982 in Iowa (USA). She is the author of several books. She lives and works in Vienna and Berlin.
Other texts by Ann Cotten for DIAPHANES